See You In Four Months

Yesterday, at 4 am, we all got up and took Jet to DIA to deliver him to American Airlines and send him on his way.

There are three things I really want to remember about seeing him off:

There's this story we tell of Jet, when we went and toured the school before he went to Kindergarten and he found out that there was a bus, he really wanted to go on it.  So we signed him up. On the first day of school, we got there early, so early he got to put his backpack first in the line for everyone getting onto the bus.  He played with the other kids while we waited, and when the bus pulled up everyone ran into their place in line.

When the bus door opened, he got on the bus, never looking back or saying a thing to us.  Compared to all the other young families telling of kindergarteners who refused to let go of their moms, the ones that had to be hand-delivered to the door, and those that fought the whole way, it was an interesting comment on Jet's self-confidence and independence and courage about an unknown future.  I guess going to Japan for a semester in Japan says pretty much the same kind of thing, too.

That he went to the extra effort to say good-bye this time meant a lot to me.

That he then communicated, in detail, nearly everything about his flight to LA was really unexpected, and fun; and when he abruptly stopped all communications before his flight to Japan John and I had to talk it through with each other and just decide that he'd probably met up with Youth For Understanding (YFU from now on) directors and/or other travelers (all of whom he'd met in Chicago a month ago) and just got busy and had gone back to his default behaviour of just knowing we trusted him to do what he needed to do. 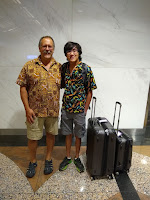 At about 2:30 am, last night, when the text came telling us about everything working out with him finding other travelers and getting on the plane okay (probably sent when he got his phone back on in Tokyo) both John and I laughed, rolled over, and went back to sleep in a lot more peace than we'd had when Jet stopped messaging us.  It was nice having the txt tell us both that he had gone to the effort to tell us all was well, and that he'd gotten to Tokyo all right as implied information.

Jet's been doing a lot of good things this last week, and on the day when I kind of lost it with the whole pressure of getting all his college apps in, an office to be cleaned, and all the last minute good-byes by people, he gave me a hug saying, "I think you need a hug."  And he was right, so I got mine with good grace, and then in the kindest voice possible he said, "Do you need to eat something?"

That made me laugh.  It's another one of those stories about when he was tiny, like three or four, and I was really upset about something, and he asked me, "Do you need to eat something?" with that toddler seriousness that was so compelling.  I guess that taught me what my default response was to when he was upset... which was excellent feedback that I was going where I wanted to go as a parent. Here it brought me up and relaxed me incredibly.  He was just going to be who he is, though all of this, and that's all I could have wanted of him.

This is not to say that I didn't cry a lot yesterday. *laughs*  And it was alright, I needed to do that, as there is a real loss of his presence, especially from having him around every day and all day during the summer.  But I was a lot better this morning, in part as we'd had him three days into the school year, and it IS the time when we usually lose him for the morning and early afternoon. So we can get on with our lives, too in a way.

So I've been making enormous To Do lists, cleaning out my office, trying out art easels to expand my painting repertoire, going through the hundreds of shelves of books I have and pulling out anything I don't think I'll read again, and catching up on the newest Rainbow Six Siege updates, operators, and maps.  Hearthstone had a huge update today, too, and I want to keep up with that as he's going to be able to play in Japan. I also lined up eye appointments, lunches with friends, and a potluck with a bunch of the parents of the senior band members of last year.  They're calling it a potluck for all the new empty nesters, and it should be fun.

One funny thing has been a job recruiter contacted me saying that she was really impressed with my LinkedIn resume, and if I'd be interested in a hardware contract job.  I had to think about it. *laughs*  But I realized I'm not going to go to that kind of extreme right now. Going back to work, even for a contract, might be a bit too much of a way to just keep it all out of mind.

The other thing Jet had me promise was that I'd have fun, too, while he was away.  So I'll do my best to make that a reality.
Tags: coping, jet
Subscribe