A Few of My Favorite Things

Finally got my little camera hooked up to the connection as well as my phone. The phone is easy... but sometimes I just snap random things with the little camera that comes out so much cooler than I thought.

Some of my utterly favorite things from the Paramount Studio Tour were things I hadn't expected. 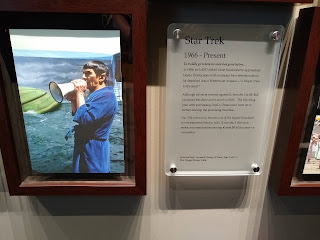 The first was finding that Lucille Ball had been the first true believer in the Star Trek franchise, and the photo in the front forum of the tour area. It was also the first time I realized just how much of a power Lucille Ball had been not only in her own studio, the Desilu production company, but later on also in the whole of the Paramount powerhouse of TV and movie making. 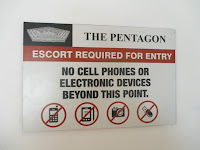 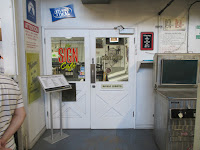 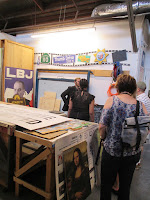 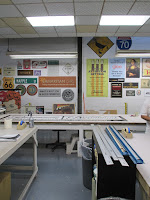 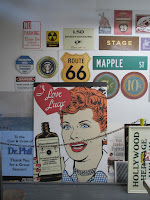 The sign shop was amazing, mostly because the guy that was in charge of it all had started with pinstriping cars, and had done such a good job on one of the cars that someone had offered him a one-time job at Disney to do that kind of detailing for the rides there.  From there he'd gone on to an 18 year long career there, and then had gone on into more general movie making art work.

He's now been in the industry for 30+ years and his son is working in the shop with him, and it's as much about his ability with handpainting signs on glass (and showing the brushmarks on the back of the glass as well as the front) as it is about coordinating dozens and dozens of signs to reface a little town for a movie set. It was amazing the amount of reject work they could show in the shop.  These are pictures that didn't include the super secret items from an on-going project they were working on. 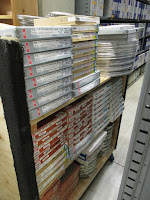 In the archives, I was utterly thrilled to realize that I was standing next to a cart that was completely filled with Star Trek films.  All of them.

I was amazed. I'm so used to thinking of all media as just being ephermial, as something I'd get from connections, and that the substance of real film wouldn't be that big a deal.  But it really was a big deal to stand right next to the physical existence of these stories that I'd loved while I grew up. These were the archival copies of these movies, the source and One True physical embodiment that had sourced all the copies that had gone all over the world to entertain and teach everyone. 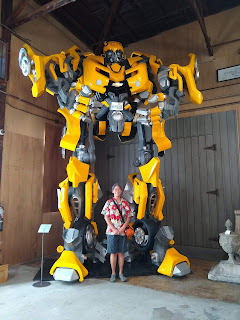 The other thing I was surprised brought tears to my eyes was finding the full-sized model of Bumblebee and being able to stand next to him in a photograph.

He was always my favorite of all the Autobots. He always seemed to be the sweetest and most determined of them all, but that may well have been because he couldn't speak. It's an interesting thing.  But he had always been my favorite and in the newest incarnations, seems to be the one that I'll still love the most. *laughs*

Speaking of giants... this is a picture John got of me next to one of the redwoods.  It was fun to just be able to look up and not have my neck hurt at all in doing it.  And still not quite see the top of the tree because it was so far up.

So just a few more pictures from various parts of the trip that I hadn't been able to get up yesterday.  There will be more from Seattle today, as there are a few Mecca points that John and I will visit. I'm looking forward to it.
Tags: adventure
Subscribe