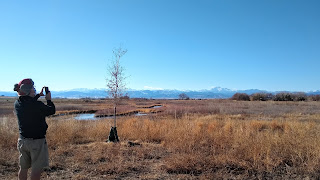 Our walk was along the Sandstone Reach, which follows the St Vrain Creek as it meets up eventually with Boulder Creek and other Front Range waterways. It is open land, with plenty of wetlands and the birds and wildlife that goes with it.

There was one bald eagle right on the waterway who flapped painfully up until it caught a current and then it circled higher and higher until we couldn't see it when it presented sideways to us and could only catch the black flash of its wings when it was headed away from us. It was amazing to watch it just ride the wind up without a single flap after the initial flurry.

It's about a two mile walk from the parking lot we've found to Sandstone Ranch proper, and another two back, all as flat as creek side paths can be, and Longmont City has paved it all with cement so it's smooth, easy walking and we can make distance at a good pace for aerobic work. There were a lot of people on the path, today, and nearly everyone wore masks when we passed each other. I'm not sure how much that's needed in open air with a path that's a bit more than six feet wide; but it was oddly reassuring to have everyone conscious of each other.

The view going back to the car from the ranch was spectacular on a constant basis. We'd stop here and there to take pictures. The sun is far enough south to not interfere with any of the photos of Long's Peak and all the ones around it. 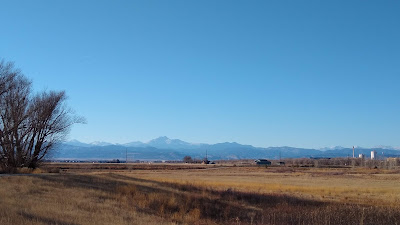 I particularly love this one with the long shadow of the trees from the low southern winter light. I may have to make a very large watercolor painting from it using the techniques a Boulder painter taught me in one of his classes where I was the only one who showed up.

The afternoon and evening were pretty quiet after that, and dinner was simple, just leftovers: turkey, potatoes from the GB Fish and Chips we'd gone to on the way to delivering Jet back to Mines, gravy from the turkey, and roasted asparagus. And after dinner I did my usual gaming, playing a bit of TF2 with FiTH on their server, doing a bit of Immortal Redneck before playing some Risk of Rain 2. Syncheart joined me about then, and we played a chapter of Lego Batman 3 for the lols, but decided that it was much more fun doing Risk of Rain 2 together.

He helped me get the achievement of opening the timed chest on Rally Point Delta. The chest locks itself after 10 minutes, so it was fairly quick to fail and try again when we went to the wrong level. The second time we got lucky and hit the right level and Sync helped get me there with three minutes to spare!  That was really great. And then we went and did the final Boss now that the game has an actual ending instead of just looping as many times as possible through all the environments.

That was very satisfying.

I also managed to put up a Happy Birthday post for John on Facebook, and was reminded by another poster of our Puerto Rico trip in January. It seems like a world ago instead of just earlier this year. I want to make a go of writing about that trip, with the perspective of being here and now rather than then. There is much I'm grateful for about that trip and I want to capture some of it, even half a year away.

Hope all of you had a great Thanksgiving! We had a wonderful time with Jet, even for just the few days we had him, and I'm super grateful for the ease of COVID testing at Mines and here for us.