A Few of My Favorite Things

Today I'm thankful for something that didn't happen. And since it's not mine to tell, I'll just leave it there. The intensity of the gratitude is as big as it's vagueness. *laughs*

Instead, I will talk a bit about my three favorite adventures in Puerto Rico, two of them happened at the very end, the other was basically when everything at the camp started to flood due to the deluge of rains that were coming down. *laughs*

Here is the video that Karina made of the whole trip:

That rain at the beginning? I recorded that just to remember the thunder of the rain pouring down. That was when the whole camp was just running with water, and it was streaming through the grounds, knee high and even hip high in some low areas around the buildings. The meeting hall below our dorm was flooded, and the other group that came and stayed in the other half of the dorm, had to mop out their kitchen.

Colorado is a very arid place, and I haven't been in rain like that for a very long time. I loved that, and the concrete bases didn't care that it was that wet, which was good.

The second favorite was an unexpected surprise. There was a restaurant we drove by, nearly every day. It was called "Latin Gyros" and we had had all kinds of amazing food all over the island, including a lot of the local Mofongo (a mash of plantains and cassava that was then shaped around a filling and deep fried) and seafood. So it seemed like cheating to go to a Latin Greek restaurant. But it turned out to be amazing. The owner and staff were able to deal with nearly 20 of us all at once, and all our food came out when it was hot and everyone enjoyed what they ate. 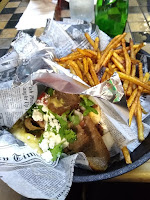 I decided to get the thing that they named the shop after and it was really amazing. They did it right, with super tender, flavorful gyro meat, all the Tzatziki dressing, cilantro, and onions I could want. The fries were the lovely skinny shoestring kind, super crisp and delicious.
And the tiramisu that came, after, just disappeared so quickly I couldn't get a picture. *laughs* It was a perfect dinner to end the trip on, and everyone was really happy and well fed when we headed back to the camp.
The third favorite was something that had happened the same day we went to Latin Gyros, which was the very last day we were on the island. We'd gone out to the northeast most corner of the island just to see what was out there, ate by a park by the beach up there, and John started looking around on Google for water taxis out to the tiny tiny island just off shore: Icacos.

Captain Mingo took those of us that wanted to go on that adventure, and it was really funny 'cause he "dropped" us off just off shore, in the water. We had to jump into the water in order to get to the island and he said that he was going to pick us up the same way. There was no dock, so that made sense once we saw it. There were a number of boats anchored just off shore, and since it was on the side of the island that faced Puerto Rico, the water was nearly bath still and nearly as warm.
It was beautiful out there, and we could watch the rain storms drop their rain on Puerto Rico from a sunny shore. I walked and walked from one end of the tiny island to the other and when I got too hot, I'd just go float in the super salty water. It was so still it was almost like lying on a water bed.
The best part of that particular adventure was that when we got picked up, Captain Mingo got close enough for us to toss all our bags onto his boat and then he helped people up the ladder up the side of the boat. When we were all on, I looked around and couldn't find my backpack and suddenly saw it with another pile of stuff on the shore. Mingo told me to go get it and that he'd get me back on the boat. He'd already pulled up the ladder everyone had used. So, trusting him, I went, got my bag, tossed it into the boat and looked up expectantly at him.
He looked me in the eye and said, "You see that strip on the side there?"
There was a slender strip of metal that was more to guard the boat when it went into a slip so that the hull wouldn't scrape. I looked and I think my eyes must have widened, 'cause he laughed.
"Just put your foot on that," he said, holding out his hand for mine, "And you'll come in. Easy."
Before I could think too much about it, I just took his hand, put my foot against that slender piece of metal on the curved hull, put my weight on that foot, grabbed the top of the rail with the other hand, and pulled myself up. Got the other foot up on the lower part of the rail, and I popped over the side into the boat, smooth and balanced.
Amy shook her head at me, "Man, you made that look easy."
"It kinda was," I said, surprised.
Captain Mingo laughed and clapped me on the shoulder. "Told you so."
It reminded me that I am capable of far more than I think I am capable of doing. That's always been true, and I keep having to lean into it at unexpected times.
I know, most people don't believe that of themselves, and who am I to argue with them? I just know that I've been shown, so many times, that I can do far more and far better than I expect that when I'm asked, I step forward with a kind of faith that seems unfathomable by many. John has that kind of faith in me, and maybe that's why I'm so grateful he's a constant part of my life.
One of those things that's gotten more possible with the passage of time...
When Jet was little, maybe five or six? We went on this hike around a Lake Macintosh. Like a trooper, Jet went around it with no problems, and it's a three and a half mile walk around the lake. By the time we got back around to the park and playground I felt like I was dying. My legs hurt, I couldn't breath, and Jet was pretty worried about me and stuck really close to me. He never even really looked at the playground with the other kids. I was...impressed with how much he realized I was hurting.
We've walked those three and a half miles a lot since then. For the summer of 2019, we lived there, even, at Karen's house on the lake, and while we walked it a good number of days, I loved riding my bike around it in twenty minutes flat. I think I've gotten to be in better shape now than I was when Jet was young. John and I usually get around it in less than an hour, even with me getting Poke stops and fighting for a gym or two. *laughs* 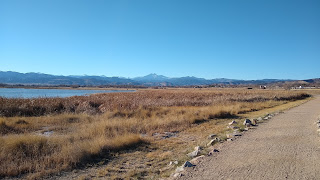 It was a truly beautiful day today. The sky so blue and clear and wide. The lake was covered in a sheet of ice from the 21 degree nights these last few days, but today it was in the mid-60s! Really warm. John was in his shorts and started with a vest, but took it off mid-way through and tied it around his waist. The views of the Front Range from the lake are spectacular, and I miss that a little from when we saw them every day. Still, it's nice to be able to just go and see it and get in what is now just a good walk whenever we like.
Tags: accomplishment, adventure, grateful, travel, walking
Subscribe