I've been making masks. A whole lot of masks.

At the beginning of the pandemic, I was actually buying a shirt from High Seas Trading Company and John gets so many shirts from them, that the owner asked me if I'd be willing to volunteer for their Mask Relief efforts to get LA front line health care workers some masks when all the PPE had dried up for everyone. So I said that I'd be happy to do two 25 mask kits. 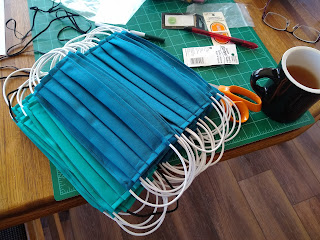 A few of my friends did them as well, and they were very fiddly, specific masks, that had four pleats, a pocket opening that was centered in the back of the mask, and a nose wire. I think I was doing them in my sleep, with all the pleats. But I learned how to pleat with a pair of tweezers to hold the pleat in place, and after breaking three needles, finally figured out how to get through all that cloth.
After that nearly all the other designs were simple. These were defined by health care workers and retail dress makers, and I have noticed, since, that nearly everyone who is a health care worker prefers the pleated design to the fitted ones, they understand that having more surface area means more air to breathe and the pleating means no leaks, and that the pleated design naturally moves when one talks. I've also realized that the design itself reflected the fact that dress makers had a lot of input on the design as it was really clever in doing what it did, but definitely not for the faint of heart with respect to their sewing machines. After the fifty were sent back and I realized that there were a number of mask making efforts closer to home.

Mask Relief no longer exists, and I'm kind of grateful, as it means that the garment industry as a whole has taken up the slack for at least fabric masks. 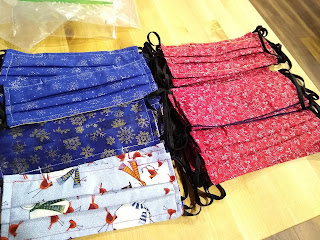 Dena's Mask Making Army was organized all over the Denver Metro area, and they had a very straightforward, simple design that could have hundreds of people cutting the fabric, elastic, and wires for those that could sew. They had been asked by a local hospital for this particular design, with a filter pocket and nose wire, but they were pretty minimalistic, but they really worked well. I actually prefer them to most of the commercial masks I've come across.

I ended up having a local supplier and, in batches of 15, I ended up making over 75 masks for them to give to people who needed a mask in the Boulder County area. They gave them to schools, prisons, retirement communities, and other organizations who really needed the masks but didn't have the budget to buy them in the insanely inflated PPE economy.  If I want to make a bunch of masks quickly, this is the design that I fall back on again.

When Jet came home in March to stay home, I hadn't really thought too much about what he'd have to do when he went back to school, but over the summer the Colorado School of Mines got really organized and created a design that would fit them, and it really fascinated me to study the design closely as it was different from all the others I'd made on several key points. The most remarkable, and the item that I now put in a number of masks that I make, is that the elastic starts out as adjustable. It's a small loop and a big strand, so you can just tie it off as tight or as loosely as you desire. It does take nearly a foot of elastic per side, though, and when elastic was hard to get, I couldn't fathom it. 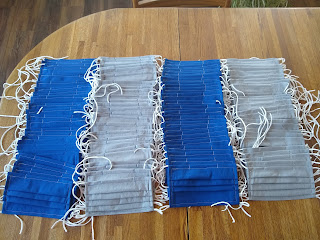 Mines, however, was not only able to get all the elastic they needed, but the supplied the fabric, the nose bars (some of them just bars of aluminum that they'd machined), and the thread!!  They handed out kits and people just came to campus, stopped off at an outside tent and picked up what they'd signed up for. Only half the people who picked up materials, though, dropped off all their masks by the due date, which made me kind of sad.

Still, I nearly destroyed my hands and neck doing the first batch of 100 masks, so I had some sympathy for those that didn't follow through. It didn't help that the fabric they'd sent shrunk significantly in the wash, so much so that the instructions for cutting them out did NOT help in the least. But they were good about saying that we didn't have to "comply exactly to the design" which made me giggle so much. 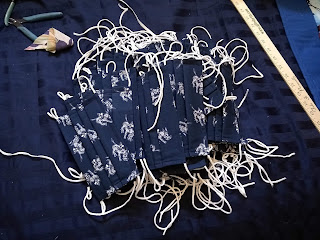 I mean, it's obvious that the sewing instructions were created by someone who didn't really sew a lot, so it did make it very accessible to those who don't sew a lot, but it was really frustrating for someone who had sewn a lot. Some of the choices they'd made from the placement of the pleats to the method of sewing the flaps of the opening down made it very very difficult to have a flow to the making of the masks.

I made some significant changes. The first was that rather than sewing down both sides of the mouth, I just sewed around the mouth, doubling up where that crossed the center seam as that was where the pocket mouth would most likely split from use. I also stacked my three pleats instead of putting them in the center, and the two quarter points. Stacking the pleats makes them not only easier to sew, but they last longer as well.  By the time the second wave came out, I was ready to do some more, but not nearly as many as 100...

I liked the second batch 'cause they gave us the Blaster Cloth, as you can see above there are little mules on the masks, and they went in all different directions so it didn't matter how you cut or sewed the masks, they would appear here and there. Several of my friends finished theirs just at the due date, which was really close to Jet going to school. So we took all of them with Jet to get him to his dorm weeks early so that he could do his RA training.

It turned out that the man who had organized all of the masks still had a few kits left. And when all my friends volunteered for another batch... I went ahead and did so as well, and ended up doing more than another 100 masks all together for the second wave. I, however, was not ambitious enough to do them in the two weeks between dropping Jet off and when the rest of the students were coming on campus, but the organizer was good about that, and said that they could use them whenever I got them there to them. So that was good. 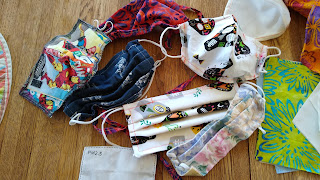 A friend of mine recently pointed me at these masks from Hong Kong, the design was made by a doctor there, and the design was used for kits that went all over the city. It's now used throughout the Asian Pacific area, including Australia and New Zealand. They have both ear loops and a strap that goes behind the neck and ties behind the head, so they're super secure, and they're mostly an open pocket for a filter. It isn't actually closed along the edges, but when the mask is on firmly enough it doesn't matter as that isn't where the airflow goes. The picture above is my random crazy collection of masks. The Day of the Dead on in the top right is the Hong Kong pattern without the strap. The other Day of the Dead mask in the bottom center is my favorite design right now.

It's a lot like the Dena's Mask Making Army design, but an inch and a half deeper, so it has three pleats instead of just two. I also sometimes put the adjustable elastic I learned from Mines; but since I know the length of elastic I like I just put that on them now, and it's exactly what I need. I also found the PM2.5 filters for the pockets in my mask pockets. They're pretty inexpensive, can be used for a week, and while they are disposable, it feels more solid than a paper towel or tissues or something. It may be no more effective, but it feels more useful.

I'm finding that people all have different tastes in masks, what they think is more effective and what they don't. And since everyone's face is built differently, they find that different ones fit better. It's interesting to try and fit someone with something they'll be able to wear comfortably. My pastor needed a far smaller mask than most women, and I was also able to give her one of the little ring elastic adjusters, so she could make the masks that were too loose actually fit her face. It makes a real difference.

I spent the morning doing half a dozen masks from the Hong Kong design, and it was fun. The fitted masks are less sewing work than the pleated ones, but more work on the cutting end. My friend really likes how tightly they fit on the face.

And it was fun to think through all the things I'd done to get to this point, and why I like the mask designs that I do and where I still want to go with it.