So since about March, we've been watching church from home, at first via Zoom and now through YouTube.

Of course, John, being John, helped lead the charge to get the service online and streamlining the process so that instead of having four or even five people sometimes to get it to stream properly, we're now down to two volunteers and one of our staff doing the work to get all the sound, cameras, and video prompting to work. 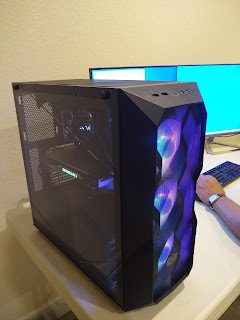 One of the pieces is this beast of a machine, with a Ryzen 7, water cooling, and a very nice video GPU. It was fun pointing John at all the resources that I had used and helped Jet use to build our machines, and have him go ham. It was far less expensive, and while COVID had made some hardware harder to get, it was also possible to look at alternatives with PCPartsPicker and find the best prices that search engines could find.
The best thing was making sure that it's upgradable, that the power supply, casing, and motherboard would make it easy to put in new things as they were needed.
The software John found was vMix, for making multiple inputs, which include everything from all our cameras to videos and PDF files for slides, and linking them together through transition commands. It's made to stream, record, and broadcast all the inputs it controls to Zoom, and a myriad of streaming services, like YouTube.
When it was just Zoom, we were handling a lot of that by hand, with the words for the hymns or prayers laid out next to the Zoom screen of the person singing or speaking on the second screen of the Zoom machine, and sharing that particular screen to the whole of the "broadcast". vMix lets there be a multitude of layouts, and we now have a number of our hymns with two cameras trained on the pianist and the singer. All the videos automatically cue back to the cameras, and prayers can easily frame people in the various cameras.
I've been going along on the adventure by learning each setup and system and driving it for Sunday services and other things, including LCJP's fund raising broadcast, which was a lot of fun. And the whole setup is up in the choir loft, so it makes it pretty easy to social distance while doing the work, or both John and I are up there, and since we're a single family unit, we're pretty safe.
And our church has always had a philosophy of being for the good of all of our surrounding community, so we've extended the usage of the system to include letting musicians be able to record things while they're socially distanced, or to broadcast a recital to their audience. It's been a godsend for a lot of people. And it allows us to help a family broadcast a funeral where only ten mourners are allowed so that the rest of the family can join in.
The things we need to do together.
John found this a few weeks ago:
It feels like so many things these days.
Through intentional training, there are enough people in the A/V team that John and I don't have to every Sunday, and we had a good morning this morning just having his whole wheat waffles, and sitting down to just experience the service. We went out for our walk afterwards, and I caught and fought Pokémon, and then got our lunches.
At 1:30 I got to play with Jess, one of the staff members at LCJP whom I've had several hard conferences with, and her son and daughter on their Minecraft server. When we'd first met, we'd talked a lot about my playing with Jet to see what he was doing and what was happening in that world, and she took those stories to heart. She's now playing with her kids on a regular basis and her husband is helping as well. They play as a family, and they've all been enjoying it a lot!  I was so glad.
After that, I went and joined up with Jet, Royal Birb, Doc Stef (from Croatia), and Open on Sunday on Team Fortress 2, and we had a blast. *laughs*  I should edit together a video from our adventures, as we've been doing a lot more TF2 lately, compared to when we were doing so much R6. 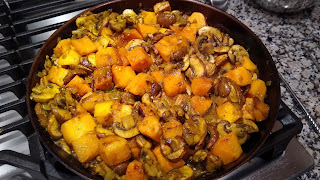 At about 6 pm, we all stopped to find dinner (okay, Stef went to sleep, as it was nearly 2 am his time), and I made one of the New York Times recipes, a lovely Winter Squash and Mushroom curry in the Indian style with cumin seeds and coriander as well as a lot of other spices and coconut milk!  It was very good, and I'm really grateful that I decided to invest in paid access to The New York Times food section, as there are always interesting recipes and they send out more things to try several times a week. With all the cooking at home we've had to do since COVID, it's been nice to get a regular injection of new ideas into our diet. It's helped with the feeling that we're stuck with what we know how to cook.
And I'm finally on board with the "maybe we should pay our news sources so that we have people who can make a living finding these things for us" idea. And it wasn't that much. I'm also on the introductory level of fees for the New York Times proper, so that I have news that has actually been fact checked. *laughs* It's amazing what a difference there is between that and all the opinions that fly around social media pretending to be "fact" through sheer "I know I'm right."  I will admit that I do listen to my friend who is a researcher at Johns Hopkins far more closely than most everyone that decides they have every right to venture an opinion. But the difference between opinion and actual news is like the difference between Trump and Fauci. And, hey, NYT actually has a section named, "OPINON", where writers get to flaunt that when they want and I am happy to just avoid it.
John made pork chops to go with it, and we had extra brussels sprouts from the the day before, and it was good.
I played a little Risk of Rain 2 with Royal and Sunday, and then got a chance to watch Jet play Hearthstone. That was really fun! He got to show me several decks he had under development, and it was really great to be able to understand what it was he was trying to do and what it was he could work with. And I guess what I'd been teaching Jess earlier in the day came back again. It was so fun to be able to share all of that with Jet. I begged off at 10:30 so I could write a bit and have my evening mug of homemade soy milk and dump my brain. Jet was happy to let me go and told me he loved me and wished me a good night. And I am very grateful for that.
The journaling seems to be helping, and I've been able to sleep just a bit better since I started. We'll hope it keeps going this way.
Tags: accomplishment, technology, ucc
Subscribe