One of those things that struck me today, while John and I were walking, was that the flags were at half mast. It was for Pearl Harbor, but it struck me again that there really hasn't been a period of mourning for the quarter million people who have died of COVID in the US, yet. Due, in large part, to Trump wanting to deny that any of this has happened, I think, but it's been a thing that's bothered me badly.

Back in 2013, when the flood happened here, it physically affected a relatively small portion of the city, but everyone in Longmont went into a sort of mourning over the losses. Not just the temporary losses of the usage of parts of the city, including a very large section of green space, or that so many people had damage to their houses, or even the homes completely lost. Luckily, no lives were lost in Longmont, though other communities were not quite as lucky.

Grief takes effort and energy. For someone close, it's a lot of energy and time. But the overwhelming numbers of people dying has created in me, at least, this omnipresent pressure of grief and underlying rage that all of this happening. There really isn't anything to DO about it, but it has been affecting my sleep and my ability to rest, and I hope, in part, that Biden will do something to acknowledge all the death.

There's been so much denial. I hear about stories of people denying that it's even real on their death bed. Maybe it's just that people are good at denying reality? *sigh* I know, maybe that should be a rhetorical question. 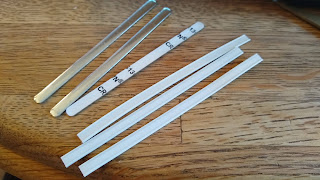 Just the other day, I was telling John that I should NOT be angry at people for not doing the kind of research that I do when I decide to tackle something. Each of us have their gifts, and I'm very not-strong at dealing with people, honestly. I'm good at chasing data when I'm interested in something, but terrible when I'm not.

Mask making was one of those places where I kept going and keep trying to do an even better job. The picture on the left is of two different kinds of nose pieces. The leftmost one is the usual one that is sold in packs of however many you want, it's aluminum and rounded so no poking anyone (unlike the aluminum bars that Mines cut), and bent lengthwise to allow for easier bending when shaped over a nose. The ones on the right are double-wire twist ties that are sheathed in plastic. Unlike pipe cleaners, neither of these rust, and the twist ties are made to be twisted and flexed, whereas the aluminum bars all have a tendency to break after being bent too often, as aluminum tends to crystalize after it's been bent. The doubled wires also don't tend to slip through stitching the way single wires do. There was a time when all I had was old electrical wire, and I was using that on mask nose pieces.

A lot of brute force experience seems to be the way I learn the best, and I'm willing to try everything to figure out what might work better.

I hadn't shown a picture of the latest batch of masks, after the last post. *laughs* They're ready to be shipped off to my parents and sister, and a few will stay with John and I. Jet says he has more masks than he has pairs of underwear, so he has plenty. *laughs* He just has to do laundry when he's all out, so he's pretty content.

I did realize, though, that when I work on masks, I get depressed. It is my way of dealing with my inability to deny what's going on. I can sometimes fool myself with my natural tendency to not really want to go out; but other times it's obvious that we're really not going anywhere. When all the masks are right in front of me, though, it's like a reminder that it's all still happening.

One lady was having a really hard time finding masks that fit her, they were nearly all too loose, and I finally gave her a pair of silicone elastic locks. The local sewing shop had them on the counter when I went there to get the Day of the Dead fabric and some bee fabric for masks, and I bought a packet to try them out and they work great. You can find them at your local fabric shop in case you're having that problem with masks, too. And I realized that not everyone sews their own or goes to the local sewing shop to see what's new and better. Now I include them with my masks that go to people so that they can adjust what they get if they need to adjust them, as not everyone knows.