... are very much less well defined than others.

With the combination of being thoroughly retired and COVID, most of the days don't have a lot of structure and sometimes I accidentally add to that by just not being terribly well organized or having much of a plan or priority for anything.

Mostly because I don't have to?

But it helps having outside input now and again, or external deadlines that reflect on what I need to get done. One of the recent deadlines was an October art show with my church, and instead of showing the paintings within the building of the church, all the artists were asked to either provide a video or send pictures of their art and some preferred music to Karina Doyle, who did the video for the Puerto Rico mission trip. She does good work.

I, however, decided I wanted to do my own, and I'd even contacted Cynthia Lin of U3. They'd just put out an album called "In Waves". I'd been following her ukulele lessons on YouTube, and loved her singing. I fell in love with their song named "Sanctuary", and asked to buy the rights to use it in my art video. They happily approved it and I paid them my fifty bucks, and then made my video. I had been making videos since my competitive days, and found that Movavi's Video Editor 15 worked just fine, especially for something as simple as a slideshow.

It got shown at church, I posted it on my Facebook pages, and folks bought a great deal of the art I had for sale. One couple, Doug and Betty, asked me to paint a hummingbird for friends of theirs for Christmas, and I had; but I still had to back it. Since I paint my paintings with watercolors, the wet mounting process has a tendency to make the paints run if they haven't had enough time to dry, so I'm usually shy about doing it any less than a week after I've painted them. 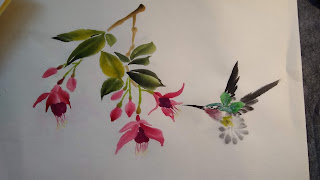 I managed it on Tuesday, hung it up on the glass of our shower to dry and it dried beautifully straight. So I was able to talk about delivering it to them, and because John had an advanced A/V troubleshooting discussion group scheduled for 4pm on Thursday and they're pretty close to the church, I decided I'd deliver it before the meeting.

With that settled, I pretty much did nearly nothing on Thursday morning and early afternoon, other than sign the painting and put my chop on it. It was a gray day, and I haven't been sleeping all that well. I woke up at about 10:30, which is super late for me, especially since I'd gotten to bed a bit after midnight (instead of 1 or 2 am); but I felt a lot better for it.

I mostly played Hearthstone, watched videos, and ended up being very surprised and pleased that Fountain Pen Revolution sent me a free demonstrator, eye dropper filled fountain pen. The nib was quite nice, and I had a bunch of iridescent inks with all the metallic flakes that I wasn't sure how much they would clog my more expensive pens. The free Muft is a seven dollar pen with an ebonite feed (!! this is a big deal as it's something that usually isn't in inexpensive fountain pens, and allows someone to heat fit the feed to the nib) that is friction fit into the feed holder, so it's easy to pull out and wash completely. So even if the flakes stopped it up for any reason, it was easy to fix.

It was a surprisingly good writer, and I'd highly recommend it to anyone wanted to start with a fountain pen, the nib flexes just a bit, and it's beautifully balanced and smooth.

At the last minute, I rolled up the painting with a sheath of protective paper, and hopped into the car with John. I dropped him off at the church for another meeting, and then headed to Doug and Betty's to deliver the painting. They wanted to show me their work space and I wandered in with my mask on, and got to be leaned on by their lovely Golden, who just loved getting petted by someone new. That was well worth.

The meeting was good, too. It was all about trouble-shooting on-the-fly problems with the sound or how things were hooked together to broadcast to both YouTube and Zoom as well as the speakers in the sanctuary (so everyone doing things could hear/see what was going on) and the problems that could happen because of the setup. But it ran late.

I'd actually made enchilada sauce for John, as he'd talked about making beef enchiladas and one of the COVID things I've been doing fairly frequently was make my own enchilada sauce instead of using the canned stuff. It's basically charring the chilies, soaking them, blending them with garlic, salt and their soaking liquid and then passing that through a sieve. Simple, but it's just being able to coat everything in chilies. But it takes a good hour for John's enchiladas to cook, so, instead, we went to the drive-thru at Taco Palace (I know, it's an amazing name for a place that serves super authentic Mexican food) and got dinner.

We were so hungry by the time we got home, the food was totally delicious.

I spent the evening playing video games with various folks. Royal and Sunday wanted some time to play TF2, and then I spent a few hours playing Mindustry with Jet's friends at Mines and learning how to actually deal with it. It's a tower defense while collecting resources for both research and building things. The research unlocks more capabilities. AND it's multiplayer, which is a Godsend when the enemies are sending multiple units after your Core. It's fun.

Getting back to TF2 has been a blast, too, especially with friends who are into the game and understand how to play. It's funny because it's feeling more like a game, where we can just play around and try all kinds of stuff. Rainbow Six Siege has started feeling more poisonous, where all our efforts just never seem to be enough against people who are either luckier, more skilled, or more coordinated or knowledgeable than we are. It's just hard to be completely mowed over half a dozen matches in a row.

With TF2, it's never more than a match or two, and that might be because of the people I'm playing with. I've also been playing with a particular community that goes back to old, retro maps or forward to experimental maps that were created by people in the TF2 community. It's a good mix, and with the open ability to make maps, there's a huge element of freshness that just can't be had with R6, when everything anyone plays on is only the stuff from Ubisoft.

Then I made the mistake of just watching/researching stuff until nearly 2 am. So today I was dead set on not doing that again. *laughs* And on writing something/anything.

I managed to do a whole list of things that were on my mind, which was nice. John and I went out for a walk in the snow. I played Minecraft with Jess and her kids. We had the enchiladas for dinner, and they were excellent. There's a depth and complexity to the enchilada sauce I make 'cause I use four different kinds of chilies (there are multiple local Mexican markets that have an amazing selection) and sear them solidly and John does an amazing job making them. I am so grateful for a husband who enjoys cooking. And after dinner I got to play Overcooked 2 with Jet and his friends, and it was a blast. They're an amazing crew. We got through three and a half worlds and all the extra hard levels with three stars, and only had to repeat one level to do it.

So a good day too. More video games than I probably should have played, but with the snow, I'm not too surprised and I'll make up for it when the weather warms again.