I have seen a lot about bone broth the last several years?  I think?  I can't remember exactly when I didn't see it in the grocery story and didn't know that baby Yoda drank bone broth in the Mandalorian (which, by the way, I haven't actually seen, yet, and am not sure if I'm going to). I know I was mildly intrigued, but not enough to pay That Much for a box of "bone broth" and not quite enough to go and get bones from the butcher to make it.

However... Sky Pilot Farms is our supplier of eggs from their chickens on their farm who all live in Longmont as well. I love getting things that are made Right Here, when I can. I was getting a dozen eggs from them at the Farmers' Market every single time I remembered. When COVID hit and we ran out of eggs one week, I went to their farm stand and bought them there in the early summer/late spring, until the week when they sent stuff via email that they weren't going to be doing ad hoc things out of the stand anymore, you had to pre-order things, and the thing that they anticipated running out of for everyone other than the people on the CSA was... well... eggs. So I signed up for their weekly egg CSA.

So every week, now, we have eggs. Beautiful, multi-colored, sometimes absolutely enormous eggs. And I am happy to know that the older the chicken the more likely that they lay enormous eggs.

Yes, there is the side effect of having to eat a dozen eggs every week, but we haven't had too much trouble, especially when Jet is in the house. And when we do get overrun, John makes his Monster Cookies, which use half a dozen eggs at once, with lots of peanut butter, pounds of rolled oats, and no flour at all.

Sky Pilot also sells their lamb, pork, and a partner farm's beef along with a bunch of local dairy items including some amazing gelato and whole raw milk. They have specials now and again, and last week, of all things, they had "broth bones" for sale: two pounds for three dollars. So I ordered two packs of them and set them up for a 24 hour simmer with a few aromatics after a thorough high heat roasting to give them color. And the results are amazing.

I have a three gallon pot, and the volume of bones that went in was probably a gallon. I put a gallon and a half of water on it, and got nearly two gallons of broth out of the long slow simmer. Most of the connective tissue and a good deal of the bones themselves dissolved into the water with time and heat. And it gels like a champ, and when I filtered it from the particulates (including the peppercorns, a quartered onion, and the sad last branch of celery that was left from Thanksgiving) I put aside a mug of the broth and couldn't quite tell the fat on the top from the broth itself as both were so thick. An ice cube floated on the top took off all the fat quickly, and then I microwaved the broth, added a solid pinch of salt and it was heaven in a mug.

These recent days have been iron cold. Gray skies, bitter winds, and a thin layer of snow that turned into sheets of ice. When there's less than two inches of snow most of the snow removal companies who are local don't bother coming out. The usual weather after a snowfall is sunshine, and the solar energy usually melts everything that's on pavement. Unluckily, this time, we've had three days of overcast, one of sun (to melt enough to puddle), and then another couple days of below freezing weather with nights in the teens (-10 C too it turns out) and it's slick out and cold enough to nip the nose and fingertips if they're out of mittens. 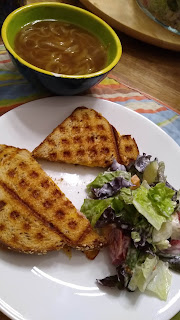 In that weather, the broth is a Godsend when I'm too tired or lazy to make food for lunch, or just am dehydrated from the heated interior of our house. Tonight we're having onion soup, just two onions caramelized and simmered in the broth with grilled cheese sandwiches (instead of the usual crouton and Gruyère I do because I didn't want John going out and shopping when we really didn't need it) (and, yes, we make our grilled cheese sandwiches in the waffle iron, it works like a panini press but grids!) and salad for dinner.

This last weekend was the annual Community Days in December for Pokémon Go, and it was bitter cold on the Saturday of the event, and I was wandering about out in the cold with three layers of coats, my fur hat, plenty of scarf, but my hands were bare to the cold 'cause I couldn't find my conductive gloves. My knuckles and the skin around my nails are shedding the skin that died that day. It's been a reminder that I really do get obsessed sometimes when I shouldn't. A pair of players came by in their warm car to hit a gym standing by me, and I joined them in the raid, using my local pass (which is nice as we get a free one every day, unlike the remote passes which cost in-game money). But they looked so warm I finally realized I probably should go back home.

Mistakes are opportunities to learn. *laughs*

My gamer boys are trying to impress that upon me, too. Rainbow Six Siege has always been something of an emotional rollercoaster, and some of it is the folks I'm playing with, but some of that is me, too. I hate losing, and I hate being the one who made the mistake that gets us to lose. But I think I'm focusing too much on that aspect of it all, and just need to keep learning.

It's kind of spilled over onto these blog posts, too, as I am finally realizing that I don't need to get down on myself when I miss writing an entry. I can just do the next one when it comes around or if something excites me enough to write about it. That will be Good Enough. See you next time.