Might As Well Start as I Intend To Go

It has been really nice having Jet back in the house, even though I tend to revert back to old behaviors and patterns when he's around. I want to take advantage of the time when I can interact with him, so we watch YouTube together while eating breakfast and lunch. There's always the afternoon walk with John and then we either play video games that all three of us like or we have, since Christmas, watched The Mandalorian together.

Kathy, my sister, gave the family Disney+ for a year, which has been really nice, as I finally got see what was up with the bone broth. The series was a lot of fun, especially with all three of us getting to see it at the same time. 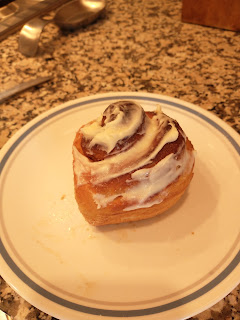 We've done most of the usual things, including Jet baking "Crack Choix Buns", which are basically cream puffs with a crackling crust of cookie that crisps everything up really nicely. I've made Shrove Pancakes, he's made baked pancakes. We had prime rib, Yorkshire puddings, and Brussel sprouts for Christmas dinner, the usual cinnamon rolls for Christmas morning with Jet's cream cheese frosting, and managed to get things organized enough to do Hot Pot for New Years Eve. So the food has been good, and, on the most part, I've stuck with my no-sugar-alone diet pretty well.

My blood sugar did reach "normal" levels according to my doctor, in this last year. The blood test was interesting to get, but it was good to know that my blood sugar had responded well to not eating nearly as much sugar and substituting most of my carbs for whole-grain or whole vegetable carbs.

The Christmas tree is up and we all got some nice presents, including Kathy's Disney+. I managed to get most of my Christmas and New Years presents out before the mad rush of mail delivery problems, and in Colorado we haven't had as big a surge in COVID cases as some of the rest of the country. It fits the demographics here now, and reflects the nearly All Blue surge here in the Front Range part of the state. Some of the more remote areas and those very conservative areas around Colorado Springs aren't doing nearly as well, but so it is. So it's felt relatively safer.  I will probably go back to 911 after next week, when Jet goes back to Mines.

The days aren't particularly remarkable, but we're definitely enjoying each others company, and that's eaten into my usual time gaming pretty thoroughly. It's nice that gamers understand when Life interferes.

I got a background that reads, "When you get tired, it's good to rest instead of quit."  That seems to work with a lot of things. So I'm happy to have rested a bit, and to write again.

I hope everyone has a very happy New Year, better than the last.