Still Sad and Observations about the Longmont Police 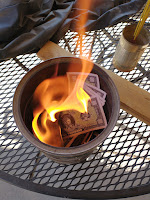 I burned Hell Money for Morgan when he died during COVID in an ICU for an infection of the ankle. He was younger than I, and he was a kind man whom I had shared sushi with in a restaurant near BigBadCon when all the other folks went for BBQ with deep fried things. We had enjoyed the lighter fare and the smaller amount of company and we'd talked without the whole crowd of folks he'd always happily entertained, and it was good. I mourned him at a distance, for reasons you all well know.
I still miss Isabel. That's to be expected for a while to come, and I find that I miss George more, too, with that. She kept his memory bright, and that kept them clear for me, too. Now I need to do the work for both. My stacks of hell money have been depleted significantly this last year, and it's a reminder for me that it's okay for me to feel sad when I'm still mourning. The incense and the smoke comfort even as they sting, and I remember all my dead. 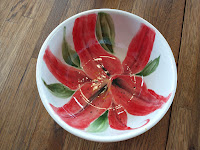 Even the ones I didn't know. The Boulder shooting at the King Soopers was a really big shock to the whole community. One of my friends lives within blocks of that grocery store and she shops there all the time. Just before the shooting, she'd asked me to paint her a bowl, and I'd found a picture of red lilies on her Facebook page that she loved. So I mocked it up and then painted the bowl for it and it was done a few days after the shooting. She told me that getting it made an awful week just a bit better. The victims of gun violence aren't just the ones who were shot...
One amazingly cool thing that came out of all of that was the veneration of the officer who was killed responding to the shooting. I've been hearing so much negative about police officers, that it was amazing to actually hear so much good about him, his family, his department, and all about his admirable values and actions throughout his time. I am sad that the positive stuff could only come out because he'd died. I burned Hell Money for him, too. So it is, I guess when so many people don't know or understand who and what their police forces are.
I've spent more than 10 years now at the Longmont 911 dispatch center as a volunteer, listening to the telephone calls and then the radio dispatching of our police and firemen. I understand really well, now, what parameters our officers have to work within and how much an influence our organization, hiring policies, and the direction our Safety and Justice Chief took make for a difference in how our police force works. Twenty years ago, there was a racially bigoted incident in Longmont proper, where the police were entirely at fault. The city acknowledged the problem, fired that chief, and with the help of the new Chief Butler, completely restructured how our police force works as a force for public safety. Chief Butler became the head of our entire Safety and Justice department, which was for both the police and fire folks.
Earlier this month, I was interviewed by a lady who'd been a social worker for 20 years, and she was getting an advanced degree at CU. Her class' research project was to make a video about restorative justice, and she and others in her class were interviewing me and other members of the conference that did the six hour marathon conference. As a part of the interview, I said, "The police are the people who help moderate people's behavior when they either can't or won't do it themselves."
She looked at me and said, "That is the most... " She had a complete loss of words for a moment. "Neutral? Lack of...  I don't know.... description I've ever heard of the police!!!"
I blinked at her. "I mean, that's what they're for, right?"
"Well, that's what they should be, but that's not the case so many times."
I shrugged. "Well, in listening to the Longmont police every week on every case that went to court for ten years, for all that they're still the kind of people that run toward danger rather than away from it, that's what our officers do. The officers who know about mental issues with certain households actively call in when they hear that there's trouble even when they're off duty, and they advise on best approaches when they have experience with how to deal with those who are acting out. They back each other up, and do their best to keep everyone safe. I heard a dispatcher talk down someone with a gun and get him to go out to meet the officers with his hands up by addressing the fact that he'd be embarrassed to be seen by his neighbors. Everyone does what they can."
Or my city is just weird and/or we saw what the problem was and did what could be done to address it in the past, and so are reaping the benefits now?  Every jurisdiction in the US has different laws, different hiring practices, different officer management, different ways of doing things because their "best practices" are from what they've learned from their mistakes. If they learn from their mistakes, I know that even some local jurisdictions that don't. But it angers me greatly when anyone makes generalizations about All Police when they obviously don't even understand what shaped their local jurisdiction.
We had a Chief who walked with the nominal head of our Hispanic community every single Sunday for all the decades he was in office, and the two of them would talk with people, ask how they were doing, what they could do to help, and ask about any problems that weren't being addressed in the services that were being provided.
It makes me wonder, what if a city started with the idea that the police force they have is just for helping moderate the behavior of people who can't or won't follow the laws as laid down as social norms by the people of their city?  Who would you actually hire for that? How would you choose who got to be on such a force? What would the criterion be? How would they patrol? What would they look out for?
I got to preview my bits of interview, and that particular bit was left out, but some other parts that were good were left in. But the observation about what a police force should be seemed to be something that she'd never thought about before, and no one had actually crystalized it for her the way I had. So I thought it would be interesting to have other people, maybe, think about the police that way too. If it spreads, who knows what might come of it?
Tags: processing
Subscribe