Jet loved it after he got used to the idea of being out of the house, and we walked the whole way through the outdoor portion. He jumped rocks, ran races with me on ledges, and we had hot chocolate and mocha at the Starbucks while John bought some shoes. We got such BIG stuff that we finally ended up with a bag big enough for a small child and hauled it into the Discovery Store where Jet discovered the joy of making up a Christmas list.

He loves writing. He loves writing things down on a piece of paper, and he asked me to show him all the letters he needed to spell out "Dinobot" and "Octo Spinner" and "Forces of Nature playset" and... it was pretty impressive. The counter lady thought it would be better if he had a catalog and circled what he wanted; but she missed the point entirely. For him it was really about writing down those things he WANTED, and the concept of asking Santa for them by writing a letter to him was fascinating.

Jet's teacher said that Jet's handwriting is beautiful. For a four-year-old it really is, and he loves doing it with as much precision as he is capable of. And he just loved writing those things down and that satisfied him enough that we didn't have to buy him anything at all. That was very good, indeed, and taught him a bit about anticipation. It's fun, too.

With the huge bag of Stuff, at the other end of the mall we caught the shuttle bus back to our starting point. It turns out that the Zip trains, which were actually designed for Flat Irons mall, are now all gone. They were custom made for the mall when the mall was first built, and the company that made them went out of business this year, so they couldn't get any parts for the critters. So Jet's Tattoo Trains are No More. They were the only ones ever made, which makes them kind of cool, now, but they're all gone but one, which is going to the Transportation Museum somewhere...

Jet doesn't like the buses as much as he liked the trains. Though he sat down when the driver asked him to sit down. That was to the good.

We had a HUGE lunch at Red Robin and while Jet fell asleep on the way home, he woke up while John tried to carry his seat into the house and put him into a good napping area.

We spent most of the evening just sitting around and watching football and playing with Jet's mountain of Legos. I sorted the mountain into "generic parts" and "working parts", i.e. the parts that seem to have some specific task in mind, i.e. boat hulls, car frames, wheels, hinges, etc. The other box is just full of generic bricks of all colors and sizes. It's useful for searching through when needing some kind of part. I was then able to rebuild John's Land Rover model into a red Forward Control, which was cool.

Not *exactly* what it was before, but then, it's Lego, yes?

In the first Midnighters book, the mathematician girl built a model of herself using Lego and I loved that she was reluctant to take it apart and update it to her new look because one could never really capture what the old model was once it was changed into the new. Mutable and rarely recordable, especially the inside parts. This is Jet with his Way Too Big Pajamas. He's been loving them ever since it turned cold (below freezing nights), and won't wear anything else. Luckily, Target had other sleepers built just like it but with a different pattern on the fabric.

Liralen's Dog Coat
This is my Dog Coat. I guess. :-) The game reminded me to wear this more often. I love the colors of it.

The other day I walked into an Aveda costmetics and skincare shop. I was wearing this coat. The samples that normally cost on the order of six to seven dollars apiece were mine for free. I was impressed at the power of the Coat. Hee. 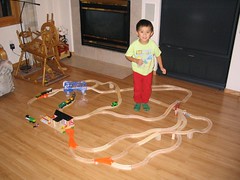 Jet's Giant Track
Originally uploaded by Liralen Li.
This is actually Jet with a very, very large Thomas the Tank Engine track that he and John built together. Since the tracks have to be cleaned up in order for the cleaners to do their job, these layouts don't last all that long and it seemed worthwhile to capture it while it was still there.

Jet really loves his track when it's laid out nicely.

As much as I like being able to quickly upload stuff into my livejournal through the update journal page and "enter that image" thingy, it doesn't wrap as well as Flickr does. Maybe I just have to study the HTML more closely...
Collapse