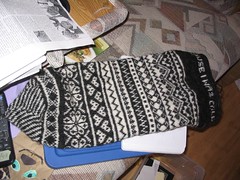 BECAUSE I WAS COLD hat
Originally uploaded by Liralen Li.
This is still unfinished, but I'm still working on it madly, as I hate having unfinished objects lying around. It is long. It really is longer than a sweater would be, and about half as wide, around, so the project became much bigger than I thought it would be.

But I'm getting nearly done with it and got mad at it and decided to add a secret message to the liner. It says, 'Because I was cold -- PLR 2006' so I can remember when the monstrosity was made.

It's actually very, very warm, and very, very well constructed. The pattern has been a joy to work with and was sold, as a kit, by Schoolhouse Press. You actually push the whole bottom half of it into the top half, and then fold up a huge brim, so I get four layers of 2-yarn cloth at the ear level. It's going to be very nice when it gets back into the sub-zero weather again. Right now, though, it's something of a pain in the hands and shoulders. Hee.

Behind the cut is what the finished hat is supposed to look like on someone: ( Collapse )

Behind the cut are the two sides to the crying sun/moon sweater that's still in progress. The light makes the purple a bit brighter than it actually is, it's nearly a deep, blue purple, nearly black in the right lights. It's got flecks of red in it, just as the yellow does as well. The petals of the sun are pretty obvious, and the moon's face can be kind of seen on the left along with all the stars on the field. The brocade look of all those loops and ovals on the "blank" background is pretty keen, I think.

The rather free-wheeling pattern has been something of a pain to follow, until I got to the chart, and how it's been pretty interesting.