Here's a Happy John in his new sweater. He definitely loves me as it was 80° in the kitchen when he tried this on for me when I was paranoid about it fitting. Whew. It fits! 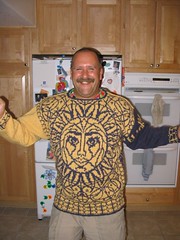 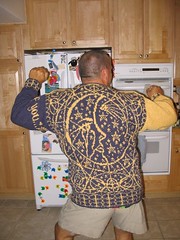 Two years ago, Jet went to a summer bible camp. A week-long, every evening get together of all the kids in the church and then some and then lots of teen and adult volunteers on top of that and they usually do a musical and every day they do crafts to make props for the musical and on Sunday they perform it to overly fond parents. The quality of the music has been pretty amazing. Two years ago, Jet did the Holy Moses! musical and ever since then he's called the church "The Holy Moses School".

This year it's kind of an archeology motif, for those that think that ranks of irony, we're not that kind of church. *grin* Oddly enough, evolution ties into our understanding of God anyway, with a big "God is Still Speaking" campaign going, with the whole truth is always revealing more of itself paradigm, it's actually pretty fitting that it's a central motif this year.

Okay, I'll admit it. I loved it when Sponge Bob Square Pants showed up in the UCC annual report and said, "They'll take anybody!" Ahem, yes, the annual report was done in film noir comic style for parts of it. *grin*

Anyway... it's summer bible camp time again, and John made potstickers, and we went and it as good. Too hot in the church, but good. I mostly just sat and knit while John chased things down and Jet did his classes and stuff. I probably should have taken more pictures, but maybe I'm not that kind of Mom, yet. Or something. Jet made a beautiful treasure box covered in glitter, so I'll probably take a picture of that sometime, and other things he does some other evening, but I don't like to be a nuisance, and pull him out of his flow with his friends. I know that when he knows I'm there, he'll act differently than if I'm not.

We ended with a quick trip to the ice cream parlor and then I talked with him about what was fun to keep him awake on the way home. This is probably going to mean that we can do our anniversary dinner tomorrow night, as Jet's really loving it.

Is now up on

advanced_knit. Link to article. Warning: lots of pictures there. :-)
Collapse