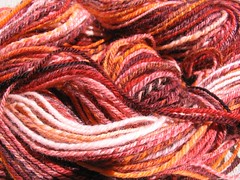 Red Rocks Yarn
Originally uploaded by Liralen Li.
So this is the yarn that I was happily obsessing over spinning just before the trip to Colorado Springs. I loved the colors and how it worked with what I saw at the Garden of the Gods. Now all I have to do is knit it. *grin* I think the color changes will be nice and abrupt and I'll get rows of each color before it changes. We'll see. But it's the "Great Balls of Fire" superwash merino from Crown Mountain Farms, which is fairly inexpensive for a hand dyed fiber. And it's a joy to spin.

The best part of it is that the colors are *not* mechanically created, and do not repeat the way they do on other dyed roving, so while the colorways are consistant, the color order is completely unique to each skein of wool. Yum. I love that kind of randomness, as it's so hard to find in commercial yarns and is only producable in a handspun from a hand painted roving or handpainted yarn. Most handpainted yarns run in the tens of dollars per ounce, so I'm very happy to get half a pound of this for just fifteen dollars. 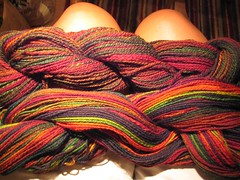 Difference between two-ply and Navajo ply
Originally uploaded by Liralen Li.
The top is a two-ply from the roving that I took a picture of earlier this summer. I tried, very hard, to take the roving, split it in the middle and get the singles to match up in the two-ply. But it didn't work very well. The colors are muddied and muddled a bit and the yarn is actually very fuzzy.

The bottom skein uses exactly the same roving, but instead of trying to match up two plies, I took a single skinnier ply and plied it with itself using big loops into a three-ply yarn. The looping back on itself is called Navajo plying and when I have big chunks of color in the roving and I want to preserve those big color changes and keep the colors clear this was, very clearly, the way to go.

The first looks like just Autumn colors, the second looks like the extraordinarily vibrant colors I bought the roving for.

One of the wishlist items at Jet's kindergarten was labelled "Yarn". I guess they wanted it for crafts and other things, and it's been quite some time since I cleaned up my stash.

So I went around with a HUGE shopping bag from Paradise Fibers and started throwing things in. Anything I'd spun as a one-off just to try something out, things I had no project plan for, things that I knew I'd never want to knit or deal with again, the last bits from long ago projects, some bits were even from garments that were worn out and long gone. I was bemused by that. Tag end balls from gifts I'd given away, and hanks and hanks of badly spun worsted weight Romney when I thought that all that was needed was a thick diameter and never thought about wear before.

I even threw in a ball of really badly, badly prepared brown Ramboullet fleece I'd bought on a whim at the Boulder Farmer's Market, the staple turned out to be half an inch long and it was matted with all kinds of hay, grass, and the super-fine stuff was felting just from the summer heat. But it looked pretty, smelled like sheep, and was in big, fat ropey top. I figured they might be able to use it for doll hair or something.

I filled the bag. John took it to the school when he took Jet's school supplies, and the teachers there were very, very happy to get the bag. They loved the variety of colors, textures, and preps. I was happy they wanted it at all. So I now have a lot more room for a lot more yarn. Hee.

So, yes. Jet's going to Kindergarten tomorrow. I doubt that I will be as intrepid as

silkiemom and take pictures of Jet getting on the bus and then race the bus to school to get pictures of him coming off it. We did do both open houses, just so Jet could see the place and know where he was supposed to go and talk to the teacher. We even asked him to take us to where he was supposed to be from the place the bus would drop him off and he went flawlessly. He knows his teacher's name and where the room is and he happily helped us dictate our note to him to be read to him by the teacher on his first day.

So the same lady that designed the Sun/Moon sweater also designed a sweater that has a Phoenix on it, with flames all around the body and a mirror image head on both sides. It's done as a pull over in a flame colorway and in a very elegant black and gray colorway on a cardigan. I've asked the online yarn shop for what it would cost to do the cardigan in the flame colorway in the Jameson and Smith classical Shetland wools and it's nigh on $100 for just the yarn and shipping.

I will admit that I'm very tempted to just get black wool and some of the flame colorway wools and spin my own for less than $40. It would be so strange to pay $100 in order to *knit* the sweater; however... looking at some listings of multi-colored designer sweaters, they're in the $400 range on their own, so it may well be worth doing. Still... it certainly would blow out of the water my baseline instinct of "knitting is cheap".
Collapse