Jet sold 50+ items for about $450, half of which goes to his school. What bemuses me is that he did all the selling. We're definitely not the parents that run around doing the work for him. He really wanted the LED infinite reflection clock (a one-way mirror as the front face), which is why he got to 50 items. Though he really wanted the "pop machine", it was another 100 items. Meefle.

I hope he gets some kind of high sales prize. It would be cool for him to get rewarded for his efforts unexpectedly as well as the ways he was hoping for.

He is pretty pleased by what he did and how much of it he did. Definitely a confidence builder for him, though I'm not sure he needed it it never hurts.

Mom and Dad gave me a Masters Chinese calligraphy book to copy and practice with. Woo! And a beautiful toothpick holder that Jet covets mightly. :-)

Kathy got me Wintersmith, the latest Pratchett and just the first chapter was worth having it. I'll probably read that again and again...

sarakate her mirror twin yarns. It was cool to take them to the little post office slash candy counter, and buy the tear proof envelopes and send them off. The shawl was a bit like sending off a working dog after raising it as a puppy, "Be good now and do what they want you to do...." Lots of work, but hopefully lots of good use out of it.

I wonder, sometimes, if I never keep my Shetland shawls simply because it wouldn't feel right if someone wasn't wearing them or using them? And I certainly don't wear lace at all. *grin*

I'm thinking of something more utilitarian than light lace, but less so than the Lion's Brand Homespun near blanket, which I don't like against my skin. It was cheap, it was easy, but it's not satisfying to wear the way the shrug kind of is. I might donate it as a prayer shawl somewhere, as it used that pattern.

I went to Jet's parent-teacher conference and was confronted with a very frightening report card format, and a very understanding teacher. Plus, she loves having Jet in the classroom. She says he always seems to know where he's supposed to be and what he's supposed to be doing, and she's never had to remind him, much less reprimand him, at anything. She enjoys him and finds that whenever he shares things, they're fun and thoughtful. So that was very cool. I suspect that he gets bored with some of the tests and assignment as he's just not finishing them. He does the ones he does perfect, but then just leaves some of them blank. Ah well. We'll see.

Then I ran off to a great massage. When I came home John had dinner ready and we ate, and then four other kids came by and played with Jet until I'd Had Enough. And I sent them all home at 7:30. Jet and I played my Star Wars II game for a while. That was pretty good, but we stayed up too late, and I didn't get Jet into bed until 10. John got me a slice of very nice chocolate zucchini cake for my birthday and it was a night.

And I had to be up at 6 this morning to just see how a 7am class went this morning. *sigh* I was cranky tired, I'll admit.

It was a good day, just full of Stuff.

... the best thing is that tonight I get to start my beekeeping class. 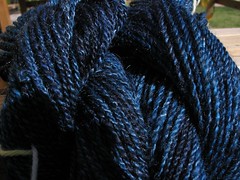 Close up of Mirror Twins
Originally uploaded by Liralen Li.
As a spinner, the skein on the right was the one that gave me pause. "That's not right." my hind brain says as did my fingers and my feet.

I'd find the singles coming loose and realize that I was going the wrong way AGAIN. Hee. It was fun to do, as it really got me very, very aware of what it was that I did on instinct, now, and what's conscious decision.

I love how the colors turned out and how the teal mohair shine just a little bit along all the edges. I'm glad of that, very much.