Jet and I watched The Backyardigans on Friday. Tyrone was "The Master Pie Maker" with all kinds of cool kung-fu moves while he yelped, "PIE-YA!" while Austen was the studious apprentice. Uniqua and Pablo were ninja pie-stealers, sneaky and quiet and they had a great little dance number on top of bamboo.... :-)

It made a great impression, as the pie makers were the pie makers for the Empress, and when she asked for the Great Pie, the apprentice made a huge pile of practice pies and ended up with the Great Pie. Of course, when the ninja came to steal the Great Pie the practice ones were used for, you guessed it, a Pie Fight! Pie-ya!

But the really funny thing is that Jet started saying that the ninja come into our house and our bedrooms every night. That he's SEEN someone opening his door in the middle of the night while everyone was asleep. Turns out our central heating system does better if all the doors are at least ajar in the middle of the night, so after we go to sleep, I usually open his door to let the circulation work better.

And then, the other morning, when John pointed out that Jet's bed wasn't made, Jet said that ninja had unmade his bed but he'd made it when he got up! Yes, indeed... :-) "Ninja unmade my bed!"

Killer Tomato Roving
Originally uploaded by Liralen Li.
This is an overdye of the yellow superwash Oops from the Wool Shed. Sadly, I didn't get all the way to the core of the roving with all of the dyes, so there's something of a yellow core to it all and the resulting yarn hasn't been nearly as bright as this roving promised.

I may well paint the yarn again and see what happens. I'd started with Kool-Aid dyes and then put some Gaywool "Tomato" on top when it wasn't red enough for me. *grin* 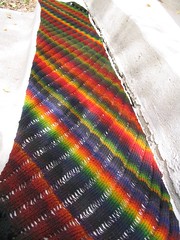 Autumn Rainbow Clapotis in the Sunshine
Originally uploaded by Liralen Li.
So this is one picture of the Knitty Clapotis that I finally finished in October. I finally found the pictures and got them off the camera.

The colors that have come out of this are very, very different than the "oh, that's an Autumn yarn" colors that came out of the yarns. It's quite a lot brighter than I'd originally thought it would be, but all the colors definitely came out. *grin*

It's really interesting comparing it to the pictures of the yarns, as it's very different than I'd originally thought it would be. I'm starting to really figure out that looking at yarn in a skein will NOT tell me what it will look like when it's knit up. It's getting more gut level than not, anymore, which means that buying or selling yarn on-line is going to be a bit more nitpicky for me.