They were talking about 10-20 inches of snow between last night and Thursday noon. It was bright and clear out at 10 last night, so I drove into work, got my laptop and headed home with it and a box of teas I'd wanted to take home for the holidays anyway. I also brought my cards home.

So I'm home, watching the snow come down on a very white world. John and George are at the OUR center. Isabel is about to join them. Jet is with the kids at the Rec. Center. And I have a few moments of quiet after a very chaotic morning between a meeting, folks trying to call when I was on the phone, and a chaos of cellphone activity. John's now driving Jet and Isabel to their places, and I'm finally working again.

Poor Jet, when he saw Dean drive off without having a phone call from him, Jet was about to cry as he really wanted to go to the Rec. Center and swim. I'm glad John could rescue him. And the volunteer shortage for making lunch wasn't as bad as John originally thought, so I have no guilt about working.

We're actually having a site shutdown due to the snow. Management is shoo'ing everyone out of the building, telling them to Go Home, please, we'll pay you for the rest of the day, just get home safe.

It's already a foot deep, drifting up to four in spots.

I stayed home and worked, and didn't feel guilty about a less productive morning when the site manager sent out a blanket email telling everyone to go home.

Jet went with John and Isabel to the Rec. Center and on the way there a bus stopped in front of John. He thought he had traction, but on the attempted stop, he found he had none at all. There was on-coming traffic to the left, so he went up on the curb to the right, and it was slippery enough that the turn wasn't as effective as he wanted it to be. The driverside mirror got taken right off, but, miraculously, something caught enough so that the van went up on the sidewalk, inches from the bus, and finally came to a stop half a length in FRONT of the bus. The bus didn't even notice. It took off.

The driver behind John got out of his car, shaking his head. He stared after the departing bus and said,"Well, they didn't even notice! Guess you're free to go..."

And off they went. After dropping Jet off, there was the one Hill in Longmont to get up, and there was a car stopped in the left lane, so John tried to take the right lane, but the road was so crowned, they slid off to the right. Oops. Some guys with a four-wheel drive and a tow rope helped them out of the ditch and they were off to the OUR Center, just fine.

There they served 100-125 people, and they were very, very grateful indeed. There were folks there who hadn't eaten for a couple of days, even. The managers decided to open the shelter for the night, when the Longmont police said they could spare someone for the night. So now they're opening their doors to the folks that really need it. Isabel spoke of a lot of phone calls inquiring after particular people, where folks were offering their homes to folks they knew needed the shelter, "Tell them to wait right there, we'll come get them."

Jet came home with Dean, took bathes with the other kids, and then headed to Tonya's to play a bit, and then she drove Jet home. They had to wade through snow deeper than their boots to get to the front door, and the mop now lives by the door. The tiles get very slippery when they're wet.

Shipping has stopped. The mailman didn't appear, and I hope he won't try. The shipping folks at work said, there's no shipping today. Better not to try.

We're warm and cozy and home now. The snow is still coming down like mad and blowing everywhere. It's supposed to last until tomorrow noon. Heck. I may even post pictures in a bit. *grin* The foot of snow on the roof is faintly menacing. Our neighbor, the air traffic controller, is bringing his sleeping bag to work, he figures if he's snowed in over there, he'll just stay there. Not too bad an idea. It's good knowing he's on watch. I doubt anything's coming into or going out of DIA now... but I could be surprised, the de-icing facilities there are some of the best in the world. 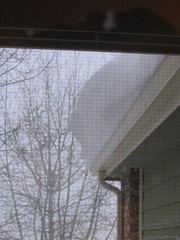 Roof Drift
Originally uploaded by Liralen Li.
This is a south-west facing roof, and the snow drifted up there. I took this around 3:30 pm here, and it's grown considerably as it's snowed steadily all day and into the night. The snow is STILL coming down.

We only get heavy snows when we get what's called an upslope condition, when there's a low either here or to the west of here, and it pulls the winds west from the east and pushes the air into the mountains. When the air is forced up, it gets wrung out and all the moisture comes out. In the winter, it comes out as snow.

With the jet stream above us heading from the west to the east all the time, this is a rare occurance on this side of the mountains. But when it happens, it *really* dumps. Wow.
Collapse