A friend from Caltech sent me this from serutan:

"Shortly before the release of 'The Adventures of Buckaroo Banzai: Across the 8th Dimension' in 1984, physicist Carl Sneider of U.C. Berkeley wrote a surprisingly interesting essay on the physics behind the movie. Since the essay is not widely available on the web and I could only find it in plain text, I posted a more readable HTML version on my site. Among the more interesting points Sneider makes are that the oscillation overthruster is the result of decades of research instead of the usual laboratory accident, and its development corresponds surprisingly well with the evolution of particle physics from the 1930s to the 80s."

Link to the essay as presented by serutan.

I should probably forward this to my friend who was a medium energy physicist... *laughter*

Today's a snow day at work, too! And they're opening tomorrow, but I don't work tomorrow!

John has officially measured the snow pack in our front yard with a yard stick. Of course, he's wearing shorts while doing it as "it's relatively warm out there". We got 20" over the last day plus. Wow.

Okay, I might still work on a technical book or two while I have some quiet time as the boys are all out shoveling. The snow is up past Jet's waist, so he's helping Dad with the secondary shoveling.

When John and Isabel and George got back yesterday afternoon, the van high-centered on a drift, so they had to shovel out part of the driveway, shovel out the van, and then neighbors came and pushed.

The snow stopped this morning, a bit earlier than predicted (noon), and the local snow plow folks are going great guns and most of the major roads are now open. It's *GOOD* to have plenty of snow removal equipment. I'm so glad of that and the relatively flat roads here. 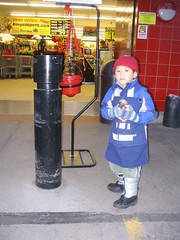 Little Ringer Boy
Originally uploaded by Liralen Li.
Here's Jet as a Salvation Army bell ringer. It was cold that day, and he was dressed for it. What's funny was him turning around in circles while ringing and he later told me, "Dad kept telling me not to do that so I wouldn't get dizzy and fall in front of the cars."

John took the picture, and I think he was standing in the street when taking it as the the black post is really the protection from the traffic for the front doors.
Collapse