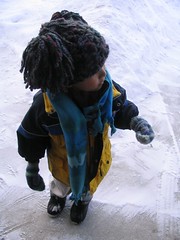 Jet in an Angie-hat
Originally uploaded by Liralen Li.
This is Jet in the hat that

aelfsciene made for me. It's a little small for me, but perfect for Jet, and everywhere he goes he gets people going, "Wow, what a GREAT hat!" It almost looks like he has big, poofy ponytails and he cheerfully bounces and flings them in all directions. He likes it a lot, too, I think because of the compliments and because of how it feels when he wears it.

It makes it very easy to spot him. I have a little video of him just jumping for the fun of it in this hat. *grin*

I use Thai Kitchen's Pad Thai Noodle Meal Kit. It *should* be available at your local grocery store, but there is a mail order place behind that link. I also use a bunch of other stuff with it. So my recipe is:

1 Thai Kitchen Pad Thai Noodle Stir Fry
10 Frozen Prawns (usually from a bag of frozen, shell-on BIG Tiger prawns that go on sale a few times a year)
1 egg
Some Bean Sprouts from the local grocery
1/3 cup chopped, Salted and roasted cashews
6 sprigs Cilantro if you want it
1 sliced on the bias spring onion/green onion if you want it.
1 quarter lime, cut into wedges

I start by putting the frozen prawns in a bowl of cold water. Then I do the package instructions for the noodles, boiling some water and soaking them. When I finally do the cold water rinse, I check on the prawns and make sure that they're clean. Usually the large ones have a cut down the back, and you just have to make sure it's rinsed out. Otherwise, cut down the back of the prawn and clean it out.

I crack the egg into a small bowl and beat the heck out of it.

Then I get my small iron wok and put it on a HIGH flame. Before it's too hot, I put some oil in and cook the scrambled egg and chop it up real good. Then I put the cooked egg into a clean bowl.

When the wok is good and hot I cook the prawns until they're *just* pink all over and their insides aren't quite transluscent any more. You can usually tell by looking in the cut down the back if the center is cooked.

Then I put those prawns on top of the scrambled egg, as I don't want them to overcook. If it were chopped chicken instead of shrimp, I'd likely just leave it in the pan when I put the noodles, sauce or powder and water in. As it is, I like to get the noodles to soak up most of the sauce before adding the shrimp and egg back in.

I throw everything else, but the limes, in at this point and just toss to warm, and then serve it with the lime wedges so folks can squeeze the juice on themselves. 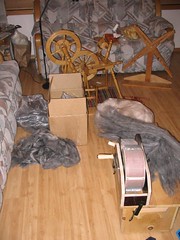 In the background is my double-wheel, double-treadle, double-drive wheel, a Timbertops Beaver, which isn't made any more, but the people that originally made them occassionally create a few more bobbins and things, so they're not completely defunct, but it's close. So I feed and care for my little beaver quite carefully.

The skeiner is quite old, and has seen quite a lot of yarn. The carder is new, and is just a roving carder. You can see the ball winder on the couch in the back, red and white. The wool is the wool from The Sheep Shed Studio and the caps are turning out to be much better than I'd originally thought. I'm spinning some of the grey for mittens for John now that Jet and I have some. I should take pictures of Jet's felted mittens, too.
Collapse