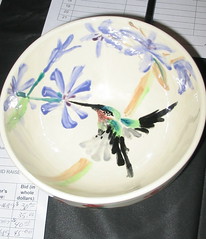 IMG_9470_TRIM
Originally uploaded by Liralen Li.
This is the hummingbird bowl, post-firing. Yay!! It, along with the froggy bowl, was in the auction, and I got to take a picture of it.

The shading on the bird turned out better than I'd hoped. With the turquoise on the shoulders and head as well as the red on the breast showing quite clearly. The white dots I'd put on in a faint hope that they'd show up on the breast actually did! Woohoo! The greys worked out really well on the tail and base of the wing, and I really liked how the flowers turned out. The brush markings for the petals were more than I'd hoped for with the single coat of glaze.

I'm very happy with how it turned out and I learned a lot from it, too. I should have left the flowers at the top just floating without the stalk in the background. Next time I'll remember that. I'll also remember that I can do better with a brush than I can with the "mosquito" bottles for 'writing thin lines'. The beak and eye isn't what I wanted, really, but it's what I got. Hee.

The outside of the bowl is on my flickr site, but it's fuzzy. The frogs with it's auction sheet is there too.

Lunch was okay. I bid on a few bowls. We found both of Jet's bowls on the tables. I have pictures of Jet's planet bowl, post-firing, on flickr.

I'm pretty happy with being in the auction twice again. *grin*
Collapse