John sang the Volare song for some silly reason, and Jet asked what it was from and where he was when it came out.

We said he wasn't even an idea, yet, as we hadn't even met. I said, "Yeah, we were probably still kids when that commercial first came out."

Jet looked shocked. "Oooohhhh... you guys were KIDS?" as if it were inconceivable that we were ever anything but Mom and Dad.

We couldn't help it, we laughed so hard, we couldn't talk anymore.

I know, I know... we *have* only ever been parents to him and he's never even thought we could be kids. So it's perfectly logical. But still...

The Whole Crater
Originally uploaded by Liralen Li.
This is my stitched together picture of the meteor crater. I tried to get some people in for perspective... not quite sure how well it worked, but... it was fun to take. 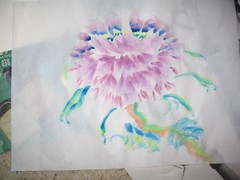 Purple Peony
Originally uploaded by Liralen Li.
My very first try at color... a purple peony attempt that is very poor. I really didn't work the blue in enough, and the stem and leaves are a complete mess, and I didn't pay much attention to the leaves. I also did the cardinal sin of re-painting some of the petals.

It's a first try. I'll get better. There's two other ink paintings now up on flickr, as a few folks asked to see things in comments. Click on the picture and it should take you to the other picture of pictures. *laughter*

I'm just starting!! So I'm not very good, yet, but I have to learn and people seemed interested in my poor beginning paintings, so I thought I'd go ahead and put up photos of 'em.
Collapse