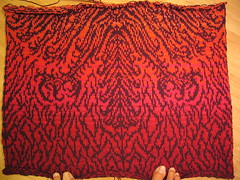 Half a Phoenix
Originally uploaded by Liralen Li.
I had to rip seven rows. Bah.

At the very beginning, I had tried to figure out exactly how many rows of each of the nine shades of background color I had to do. And I GOT IT WRONG. Dang that calculus for shoving all that simple mathematics out of my head. How could I *divide* wrong?

Anyway... I have been kind of winging the colors anyway (though by a mildly fudged fibonacci sequence to lend structure) and I'd added some red to my palette that I hadn't originally had or planned for. But by adding the rows I had, I could fudge the numbers right near where I'd stopped. So I set a life line, took it all off the needles and thought I might as well take a picture of it here anyway... so this is the picture, so far. I'm about halfway done, I think. Though past the armpit, the body gets a bit narrower, which is cool, as I can make up a few more rows there, too, I think.

I ripped just eight rows. And I'm now back on track for the colors, I think. I hope. I pray. *grin* The lifeline made it dead simple to pick everything back up again, too, which, with two-color knitting, is NOT the easiest thing in the world. So I'm content, again, that I haven't cheated *too* badly.

We just hopped into the Passat and did a little three-day trip out to ride the Cumbres-Toltec Railroad and see the Colorado Gator Farm. Though, admittedly, the latter was chosen between that and the Sand Dunes and Jet wanted to see Gators.

There real reason we went out was to ride the train. It's a coal and steam powered train that goes from the plains in Altonito, Colorado up into the mountains and across them, through the Toltec river gorge and through the Cumbres mountains to Chama, New Mexico.