It was really cold last night for the first time this season. I actually was up a whole hour after going to bed just trying to warm my feet up, but finally I went downstairs and got the rice bag warmers out, nuked them and then brought them back to bed with me. Ahhhh... I hadn't realized I was THAT cold. *sigh*

Today was a no school day, as the teachers needed it to get their stuff together, but the school offers an all-day program for kids that have parents that have to leave them there. So Jet decided he wanted to go, even though he didn't have to, he really wanted to be with kids all day, so we took him into school on the bikes this morning. We were all bundled up and Jet was still shivering. I should have put mittens on him at least for the ride there... anyway... it's good.

Better yet, last night, I put together all the dry stuff in one bowl and all the wet stuff in another bowl for pumpkin muffins. So, this morning, all John had to do was put the two bowl's contents together after letting the oven heat up and we had "instant" muffins for breakfast. They were very warm and yummy and Jet and John ate a bunch of 'em. So it was definitely a good way to start the morning.

I'm making slow progress on the camel down. I'm finally screwing up my courage for the phoenix sweater again, as I'm still terrified of not being able to finish without ordering more yarn or something... actually, worst case, I just spin up some of my Shetland white wool for the last few rows, I think. White at the very top wouldn't be that off-beat, all in all. Sigh... but so it is. I just need to keep going. 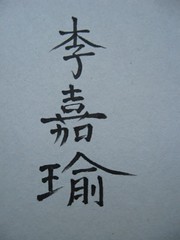 My Name
Originally uploaded by Liralen Li.
My parents gave me a calligraphy book for my birthday. So I practiced and practiced and... finally, for the first time in my life, I can actually write my name without going, "Yuk."

My sense of proportions probably got better with the painting I was doing, and now I actually seem to be balancing some of it better than before. It's still not perfectly centered, but I'll keep working on that. *laughter*

It's better than I've ever done. So I just need to keep working at it.

Jet is now drawing loaf cats everywhere. He makes an oval, makes one end a circle, puts sleepy eyes, a dot nose with whiskers, and a contented cat-smile underneath. He adds two ears to the circle head, and then does just a curve for the curl of the tail around all the toes.

He likes his sleepy cat so much he taught me how to draw one, too. *beam*

He and I covered two Post-it 3x3 pads with gold wrapping paper, and one of them has a ribbon tie to tie it closed. He has made one his art pad and the other his dictionary. He writes every word he can think of into his dictionary and sometimes draws pictures to go with them.

He really loves his books. I'm very happy he's enjoying them so much.