incandescens has me writing nearly every day, or correcting. I'm at the point where I hate everything I wrote, but I'll likely post it anyway as that's the scary part, in a way... and I promised myself I'd write and post/publish.

My phoenix sweater is nigh on done, which is good, as it's supposed to hang in an art show TOMORROW MORNING. Ahem. Deadlines are good for the soul. I have the sleeves on. I locked the front and CUT IT (I needed a sit down to slow my heart enough for me to start doing the piping up the front and neckline). But that and a wash and block should be it.

I've signed up to do all the non-ad newspaper work for a Zero Waste seminar that the church is giving in February. There's a lot of zero waste stuff going on in Boulder County, where folks throw as little as possible into the landfills. We've local events where everything is either recyclable and/or compostable, and all the vendors use things that can be either recycled or composted and the bins at the events are all set up with people to help folks sort. *laughter* But the local hospital and several other businesses are moving towards trying to have no waste at all.

An intriguing idea about starting a zero waste blog came up as well. I might set it up for them and just let everyone that's an actual expert on how to do it at home or in a business to the posting. Turns out commercial composting can take *any* food waste, which is different than our garden compost. So we've started collecting for that, too, and John hauls it into Boulder now and then.

Jet's birthday is Saturday and we're in the throes of getting that all together, but I bought all his presents long ago. Sunday the church wanted folks to bring Chinese New Year snacks and, originally, it was four families getting in on it, but now it seems down to just two and the other mom professes to be unable to cook. So it's going to be... interesting for a bit... 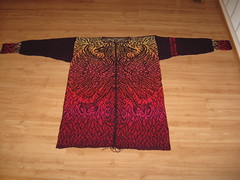 Blocking Phoenix
Originally uploaded by Liralen Li.
Finally, after pretty much exactly a year since I started it, I finished it, mostly due to a deadline in the morning. *laughter*

Yeah, there's a local art show that asked for some of my knitted stuff, so... there it goes.

I do want to thank everyone that contributed quotes for the sleeve. I couldn't decide, so I ended up standing up in my knitting group and reading all of them. When read aloud... everyone kind of frowned at all of them except for when I read, "Everything changes. Nothing changes back." Several of the women said, "Thank God." *laughter* So I ended up with that. It's from Tsubasa: Reservoir Chronicle, which amuses me no end. Thank you

Designed by Meg Swansen in her "Handknitting with Meg Swansen" book...
Collapse