"I thought we were in Seattle.  What is that huge bright thing up in the sky?"

It's been cool here, but sunny.  Ordinarily, it is sunny here through September and into October, the long Indian summer is almost always a part of Seattle weather, but it's fun to talk about, especially since all the weather reports had been predicting rain for most of the days we were to be here.  60's as a high and clouds all the way down the ten day forecast.  But it's been remarkably clear and sunny here while we've been here, and I've been enjoying it a great deal.

I really enjoyed sitting on Isabel's back porch.  I read, I sketched the geraniums, and I waited for these guys to come to the hummingbird feeder.  There were hummingbirds who had staked out the feeder and it was always something of a thrill to hear the thrumming of their wings.

Our time with Isabel is something I think I'll just hold private.  It was good and helped me heal from some things I'd been holding. She's an amazing person, and I do love her a lot.

We also did some of our usual things, going to the Pike Place Market, hitting Uwajamaya and the bookstore there.  We found all kinds of small treasures, including a pen case for me, a Porco Rosso puzzle, origami paper that had old fashioned Japanese paper on one side and a different color backing it. 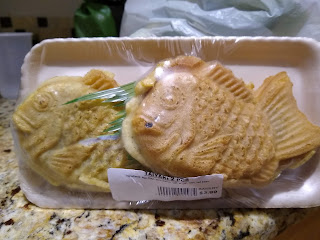 Best of all Isabel has a two-slot toaster, so I was able to drop them into the single slot and toast them until they were crisp on the outside, and the adzuki bean filling was warm in the middle.  They were amazing, and Uwajamaya's supplier (or they might make them on site?  I don't know) was really good about getting the filling to conform to the outline, so that these fish were beautifully filled from edge to edge. The interesting thing was that the paste was lighter in color than the canned red bean paste I get from the store, so they might make that as well. 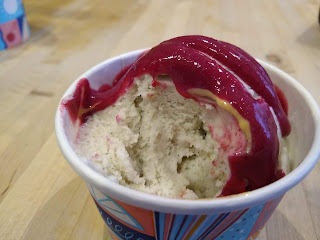 Another find was an ice cream place in Redmond called Molly Moon's Handmade Ice Cream, which had many of the usual flavors, but surprised me by having a Lavender Honey ice cream and a huckleberry topping.  The ice cream itself was redolent with lavender and the honey only added to the floral bouquet so that it felt like I was eating the essence of flowers. The huckleberry topping was fruity and almost citrusy with acidity.  I loved it.

Redmond has also gotten two interesting Northern Chinese restaurants. One of which we were able to visit.  Tian Tian noodles had the very intriguing dish of "Stir fried shredded pancake" in their noodle menu, which really reminded me of a dish my mother used to make that took day old scallion pancakes and fried them with various leftovers that turned out a bit like soft chow mein, but so much tastier.  But the other place, the Dough Zone, had the Shanghai style soupy bao (xiao long bao), so we had to go there.  *laughs*  And it was well worth it.

As you can see, we kind of dove in before I even got to snap a picture or three.  The sweet and sour cucumbers were crisp and exactly as advertised.  They were Japanese style cucumbers cut in a spiral and harder to pull apart then they looked like they might be.  The shredded ginger in the dish to the right was what really sold me on the place.  They got that right. It's what the xiao long bao shops in Shanghai gave you, and you were supposed to pour black vinegar in them to season the vinegar before you dipped the bao into them (or drizzled the vinegar into the soup spoon with the dumpling). That's a touch not a lot of places get right.

The xiao long bao, themselves, were amazing.  The skin had that perfect give, and none of the bao had holes in them so they were all filled with soup and the meat of the dumpling.  They were savory, so hot we could barely taste them to start, and then mellowed to a tender perfect example of what these are supposed to be.  The picture on the left is that of their "spicy beef roll", something we'd only ever gotten at the Taiwanese barracks food restaurant in San Diego... and it's slow-cooked spicy thinly sliced beef in a roll of scallion pancake.  And they'd done their scallion pancakes super crispy on the edges and the beef was good and spicy and beautifully tender. 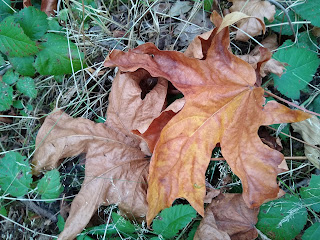 I highly recommend them.  A review said that they had no ambiance, but that also meant that I could talk to John across the table without having to shout the way we'd had to at the more famous dumpling outlet in Bellevue.  It was a very successful visit.

Fall was in the air, and these maple leaves were the size of dinner plates.  We had one morning when it just rained for an hour or two before the sun came back out, and one night I could hear the rain and I went to sleep more peacefully than I have for quite some time.  I still miss the rain.  And it was so good to just walk in the trees.  We visited Marymoore and the dog park and were very happy about the one dollar parking fee that maintained the trails, and did a lot of improvements there that were good to see.

It was a good time, and we had to go on Friday to get home before Tuesday, as I had things scheduled.
<
Collapse