So the leftover dye from nearly three weeks ago was deteriorating... the acid and the dyes don't work quite as well a long time after they've been mixed... so the boys decided they had enough shirts, and both bought two packages of new underwear.  *laughs*  Yeah.  I found a top that I've always hated being white, some socks, a few pairs of underwear, and had John buy me a one pound cone of Peaches and Cream 100% cotton yarn.

I skeined up the yarn.  After all the other stuff was done, I basically poured dyes from the bottles onto the yarn and got some interesting results.  Sadly, the gold-yellow didn't take at all.  It may have broken down faster than the other or something.  I'm not sure... but anyway... the results are in pictures below the cut.

If you click either picture it'll take you to my flickr account, and there is a dyeing section there of stuff I've done in the last couple of years.

So, first, the mild fail, all that white was actually a gold yellow... and it looked far more autumny, as the blue and yellow were greener.  Now it looks like a red-white/cream-and-blue... which might be okay for towels or something. 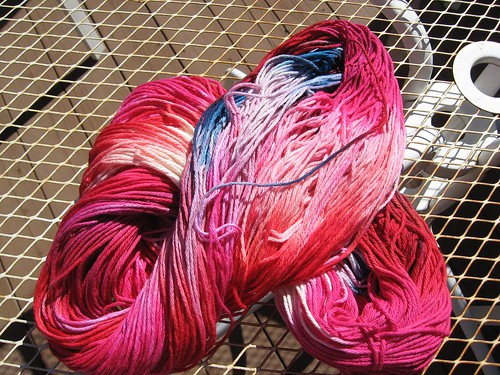 This turned out pretty nicely, though it lost all the green and a bright yellow streak through it where it came out pale blue now... 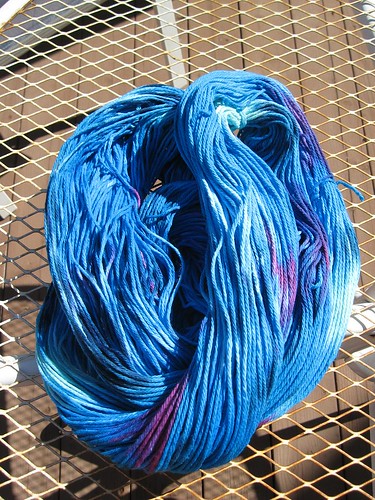 Kinda nice to get a pound of custom-dyed yarn for just ten bucks... as the dyes were to get thrown out anyway. But the sheer bleed-out of cotton dyeing is appaling compared to how much dye gets taken up when I dye wool. It's astonishingly wasteful. I think I'll stick to wool and silk from now on.